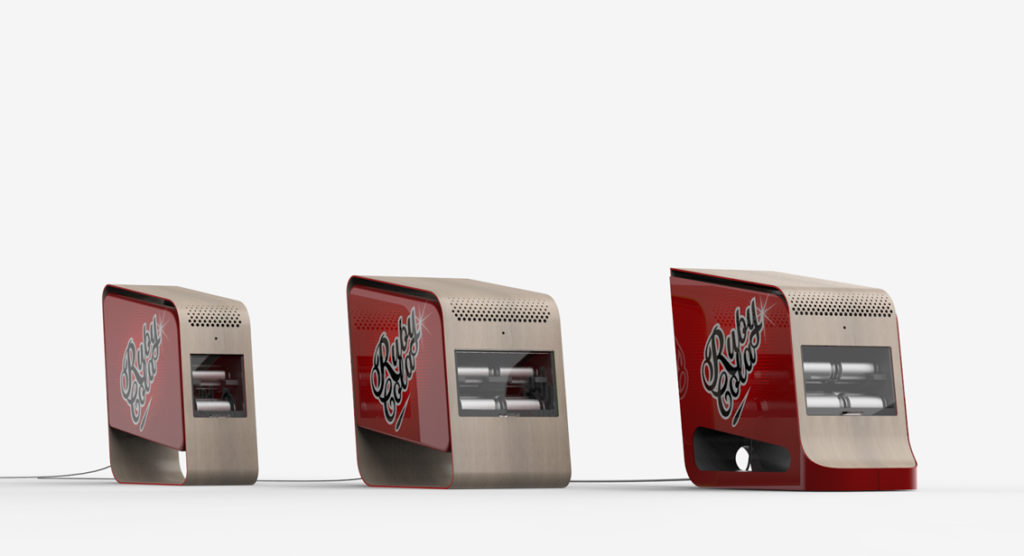 – The refrigeration industry is probably the most boring industry there is because no radical innovations occur. The technology has stayed the same, based on a compressor that compresses a liquid refrigerant, starts Veli Eloranta, the CEO of Nordic 247 Services.

– I wanted to see if things could be done in accordance with green practices. As I am an engineer’s son, I’m always intrigued by alternative ways of doing things so I wanted to create a cooling unit that doesn’t utilize compressors at all.

Born and raised in the freezing cold of Finland, Eloranta believed he could build a different kind of cooler that is not just cool but also green, giving the major POS and POP brands the ability to improve their social responsibility and reduce waste.

To make it happen, Eloranta and his company carried out a pre-study with VTT Technical Research Centre of Finland in 2012 . However, the experts of VTT did not see Eloranta’s concept as a game changing idea, telling him it could not be done in succesfull manner.

– Maybe it takes a bit stupid person to dare to argue without better knowledge, but afterwards I am extremely happy we pulled it through, he laughs.

– Now we are manufacturing cooling devices just as I imagined.

The impossible made possible

Turning point for Nordic 24/7 Services was the funding they got from Business Finland in 2014. With that they got to elaborate their research and development which eventually resulted in introducing the Home of Cool.

– With our solution we wanted to solve all the major problems of existing coolers: the size, the weight, the vibration, the servicing and of course the refrigerant waste – all of it, Eloranta describes their motives.

The Nordic 247 was granted a major funding from the The European Commission for improving electronic cooling to the level of existing conventional compressor coolers, tells the CEO Veli Eloranta (second from he left).

To understand Eloranta’s passion for product development of refrigeration equipment, one has to take a closer look at the refrigeration industry.

Along with the success, the market development has also created a significant environmental problem. According to Eloranta, refrigerators and coolers are the cause of millions of metric tons of waste every year due to the high rate of compressors breaking down and being dumped in landfills.

Forests and wastelands have become the repository for broken cooling devices.

– Let’s think about a local pizzeria for a while. Next to the cash register there is usually a refrigerator filled with soda, milk and beer. For the most part the device is owned by a beverage manufacturer whose products are being sold there. After a while, the device malfunctions or maybe the pizzeria goes bankrupt. Either way, the cooling device usually ends up in someone’s backyard out of the service network – even though it technically still belongs to the manufacturer.

– Alone in Poland there is over 130 000 missing cooling devices belonging to one big brewerie. Refrigerators constitute a severe environmental problem.

With new directives and laws there has been initiatives to reduce the emission of greenhouse gases caused by the liquid refrigerant, but they are still only scratching the surface.

And this is the set-up Eloranta wishes to change.

The cover of the Home of Cool device can be tailored to fit the brand.

The cool powered by the Nordic

The significant difference between The Home of Cool and traditional refrigerators is that the Home of Cool is completely electrically powered. It does not contain any flammable gases or fluid refrigerant and therefore it is free from any chemical regulation.

– The real revolution is that the Home of Cool can be equipped with a tracker that makes the whole system intelligent. If problems occur, the owner is alerted with a text message. System like this is less likely to end up in the dumpster.

– The Home of Cool is like Tesla of cooling devices. I often compare it to a hair dryer – its only technical function is to blow away the warm air, Eloranta describes the solution.

“The Home of Cool is like Tesla of cooling devices”

The refrigerator elements of the Home of Cool take less than 8 % of the total volume of the cooler whereas the most commonly used compressors take 30 %. That makes the device 70 % lighter and considerably smaller than usual cooling units enabling the Home of Cool to take up to 60 % less space than the smallest compressor coolers available in the market.

– This year The European Commission granted us major funding as our main innovations have radically improved electronic cooling to the level of existing conventional compressor coolers. We now work as ambassadors for the EU SME funding participating fairs as part of the EU Pavilion. We have already represented the project in Malesia and Africa, and next we are going to US and Thailand.

Until recently the Home of Cool was made mainly with plastic and metal but Nordic 247 is starting a collaboration with UPM, developing together a new line of coolers where plastic and metal materials are replaced by wood granulate and wood composite. The line will launch at CES Fair in Las Vegas in January 2018.

– We have already dared to disagree with the industry and delivered something that wasn’t considered necessary but we don’t want to stop there. When creating genuinely environmental friendly product, you will have to find a way to replace plastic.

Eloranta mentions that during the process, an important guideline for the whole business has been the high functionality of the product. Nordic 247 has managed to gain huge cost saving in manufacturing and maintenance, giving clients a customer experience very different compared to traditional cooling devices.

“If you have a killer idea, the technology will follow – the customers will tell you what they need”

– The key word in all of this is design, meaning both the exterior of the product and the service design. We believe that along with the usability, the unit has to be visually appealing too. That’s why we asked an innovative scandinavian designer called Paavo Pietola to design the Home of Cool.

– You’ve got to choose your mountain. I chose the cooling industry. I believe that if you have a killer idea, the technology will follow – the customers will tell you what they need. However, it’s equally important to create a memorable brand to support the good idea.